Last night was Muse at the Royal Albert Hall for the Teenage Cancer Trust gig. It was pretty darn special. 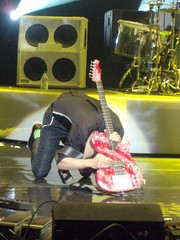 I didn’t think much of the support (the Futureheads), just sounded like really loud guitars playing chord after chord but that might just be because I don’t know their music. They did alright – better than the Noisettes at Wembley Arena anyway.

So what was so special? There’s a reason Muse have been labelled the best live act around at the minute and that’s because they are the epitome of awesome on stage. They did all the usual songs (Feeling Good, Supermassive Black Hole, Time is Running Out etc) but also played Fury (which I’ve never seen live) and Megalomania on the (excuse me) big fuck off organ. Second largest in the UK according to wiki. A lot of Muse fans are pretty excited about that, with good reason. It was immense. Matt on that thing reminded me of the Phantom of the Opera a little, he just has that haunting quality.

Of course I was more than happy once they played Butterflies and Hurricanes, which had a bit of a different twist to the piano, and was as usual, spellbinding. I can’t help it. I love that song.

There was also a lot of other random riffs and little short pieces and things and Matt for some reason burrowing under his guitar… and the massive Bliss balloons, one of which Matt burst with his guitar at the end of the song.

Anyway, I started a YouTube account for the rubbish videos I made with my phone, the audio’s ok though. My yootoob. Includes Megalomania on the organ and Butterflies and Hurricanes.