Play-Doh is obviously one of the most amazing things ever. It celebrated its 50th anniversary just this year. There’s an entire group on flickr dedicated to Play-Doh (check it out for more amazing stuff like the below image). Everyone loves Play-Doh, and I’m pretty sure everyone’s tasted it, just because of that amazing smell it has. (You can deny it all you want, I won’t believe you).

I don’t know, it might just be me, but I think it’s wrong for corporations likeMcDonald’s to get in on the Play-Doh act. I was at Toys R Us just last night and they had a Play-Doh McFlurry maker. I can’t find it on their site, but it’s there. The ‘mercan site has the french fry one. McDonald’s do and will always target kids, but that doesn’t make it right. The little MickyD’s checkout setsfreak me out and then some too, why would you give that to your kid? “Here Bobby, have this McDonald’s checkout! Aspire to be a checkout person, live your dream!”

If that was me I’d give my kid some paint, or something musical, or a book or a football or something. I mean seriously, who would give that to a child. If you would, I’d like reasons. It also makes me wonder what kind of kids would *ask* for that kind of thing. Why is that ok in society? Everyone knows McDonald’s is evil, everyone knows they’re bad for you… so why?

I also appreciate the concept of propaganda, and that MickyD’s list of crimes may or may not just be media hype, but, if there’s even a grain of truth… I’d rather steer clear. And have done, for almost 18 months now. I can’t remember the last time I ate real fast food, and I doubt it’s something I’d do again.

Also, I miss Sesame Street. Where has it gone? WHERE!?! 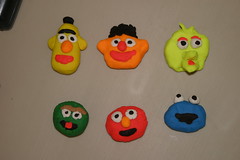